This was, by far, the most delicious challenge I’ve had yet!! I’ll gladly do it again if anyone wants a repeat performance!!

“Learn how to make pizza and throw a pizza party for friends and family!” – from my cousin Taylor and his wife, Sarah! 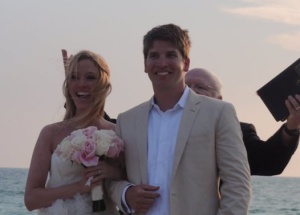 Taylor and Sarah’s wedding on the beach in my favorite place on the planet, Boca Grande, Florida.

My cousin Taylor married the greatest lil lady named Sarah. She is ALWAYS on the move, always having a blast and fully embraces the joy in life. On top of that, she is one of the most motivational people I’ve ever known. And (after we’d had quite a bit of wine at family dinner on the eve of her rehearsal dinner) she decided to let me do her makeup for her wedding, which was far more exciting for me than it was for her, I’m sure. That has actually inspired a couple of other challenges coming down the pipeline so keep an eye out for ’em! Taylor is the definition of entrepreneurial. He has incredible ideas and then makes them happen! succeeds. He is one of my toughest critics, but biggest supporters and I greatly admire that in him because it reminds me of his father. The two of them love cooking and creating and I’m pretty sure this was the perfect blended adventure for them to give me!  The entrepreneurial nature of the restaurant I’ve selected just brings it all full circle.

One of my longest friendships is with my friend Stacey Harrington. We met at college orientation and became fast friends. (She’s the one I planned the wedding shower for not too long ago). She has been dating an awesome man named Steve Mitchell for quite some time and they actually just got married a few weeks ago.  These two are always willing to bend over backwards to help me out with stuff and once again, they’ve come to my aid. 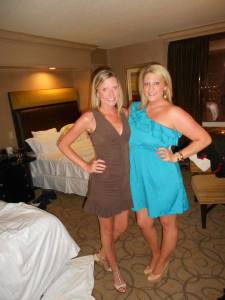 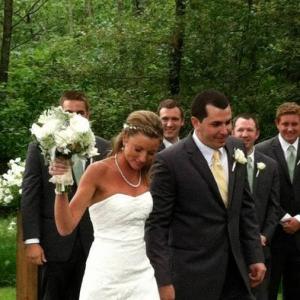 Little known fact…Steve is also a retired freestyle rapper and Doc Optimo made an appearance at their wedding reception – easily the highlight of my evening! Don’t worry, Steve, while your rhymes were sick, I’ll keep the video off the blog. 🙂 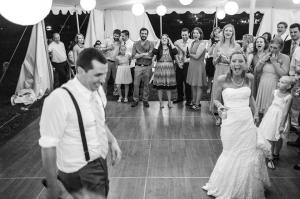 When Steve is not dropping the beat, he is the front man/bar manager at A Tavola, a pizzeria and authentic Italian eatery in Over the Rhine. For those that aren’t from Cincinnati or are unfamiliar, Over the Rhine is one of Cincinnati’s shining stars. It is our oldest and most historic neighborhood. Rich with character and artistic flare, this area has become quite the hot spot for independent restauranteurs and small business owners. Similar to Market Street in Louiville, KY, Vine Street has created a magnetic draw bringing people from all walks of life to feast in the same place. 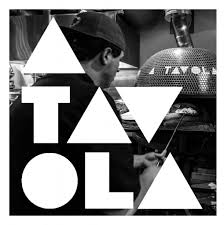 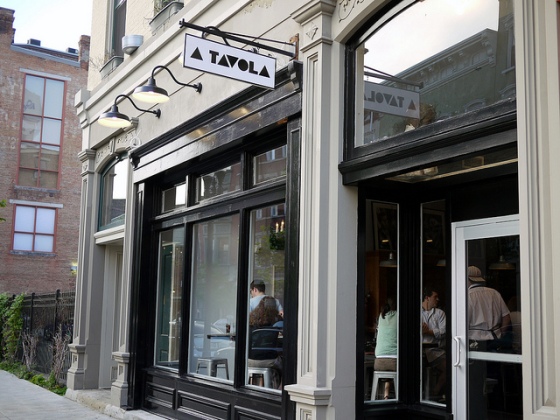 The restaurants run the gamut from Bakersfield‘s fabulous tacos and Senate’s gourmet hot dogs to Anchor’s freshest seafood around and Mayberry’s deliciously upscale, yet affordable, cuisine. I am devastated to share that Mayberry has made the difficult decision to close its doors on July 7th, ending with a final brunch. If you haven’t been check it out ASAP. It truly is one of my favorite spots and I’m very sad to see it go.

Tucked in between eateries are a wide variety of bars and shops, as well.  Whether it’s your corner chill spot, an outdoor oasis filled with activities or the “hottest” dance floor in the city, you literally cannot go wrong. Shopping covers everything from clothes to furniture, mostly featuring local craftsmen’s wares. 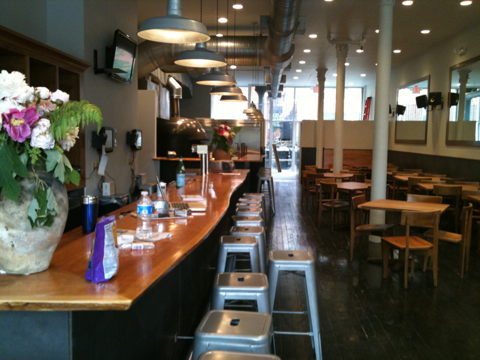 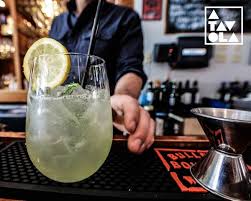 I spend quite a bit of time in the area as a good majority of my friends live around there now. Christy, who works for 3CDC, a non-profit organization devoted to creating a bigger, better Cincinnati, and lives in the heart of it all, is always telling me about different happenings and new events that either her company or other local establishments have going on.

The point is, if you haven’t been down to visit, I don’t know what you’re waiting for.

A Tavola has an advantage over the other places I may have considered because of my ties to Steve and his friends. After traveling the country exploring his love for pizza and a run of successful “Pop up pizza nights” at Take the Cake, a fabulous bakery and eatery in Northside, Jared Wayne decided to open up shop in the up and coming neighborhood of OTR. His background was in real estate development and he saw a good thing coming in the area. 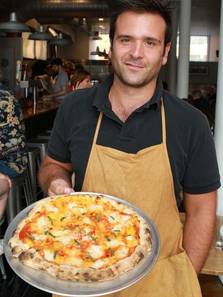 After getting a couple of his friends involved, the dream became a reality. They imported a giant handmade brick oven from Naples, Italy and hit the ground running.

I watched the whole process unfold as we caught sneak peeks of the construction progress on breaks between rounds at The Lackman, my favorite bar and one of 4EG/Bob Deck’s masterpieces, located just across the street. Seeing the excitement of it all made me really want these guys to succeed. They took a huge risk with minimal experience in owning or running a restaurant. Somehow, they knocked it out of the park. The wait is generally quite long and the line is out the door. It’s great though. You put your name in, then bop around the area until they call your cell phone to tell you your table is ready. Forget having one of those pesky beeper things that only let’s you roam so far! You can go wherever you want while you wait!  They even signed a lease to open up a new location in Madeira! Get excited, suburbanites! 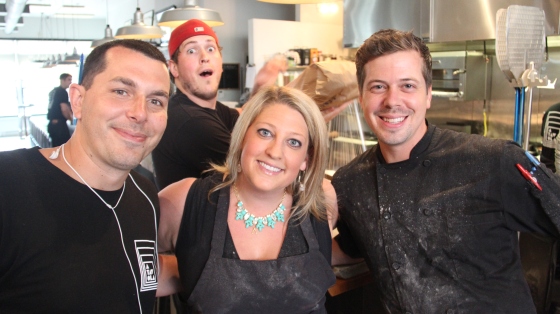 Steve and the gents at A Tavola were gracious enough to let me come in and try my hand at tossing some dough. I’d like to thank Leroy for being so particularly patient with me! My parents, Aunt Tessie, cousin Terri and best friends Megan Stacey and Christy Samad came down to join me and taste the food I’d created, as well as my other faves on the menu. Christy filmed some of the footage and joined me in one of A Tavola’s finely crafted cocktails. I had a Corpse Reviver 2 and Chris had a Gin and something or other. It was served with an ice ball, which I thought was pretty cool.

Here is a link to A Tavola’s menu/website. It’s not just pizza and they offer weekly specials on drinks, pizzas and antipasti items. They make the cheese fresh and cure all of the meats in-house.  All of their veggies and produce are locally grown, with the exclusion of their tomatoes. They only use Italian tomatoes. And my oh my, they are delicious!  They even have items on the menu that my mom can eat with her current dietary restrictions! (One chemo treatment left, by the way!!!! So pumped for you Care Bear!)

It is magnifico and perfect for all ages!  Without further ado, my pizza tossing abilities:

Having some trouble embedding this one. Watch the video here:

I’m gonna take a minute to promote small business while I have you listening to me on my little soapbox. The news of Mayberry closing makes me genuinely sad. There are lots of people out there testing their entrepreneurial strength in an economy that makes it tough to survive. These small businesses and restaurants are part of what are making Cincinnati thrive these days. There are so many great assets to our community that rely on our support. Visit them. Love them. Return to them. They need you.

One thought on “When the moon hits your eye…”